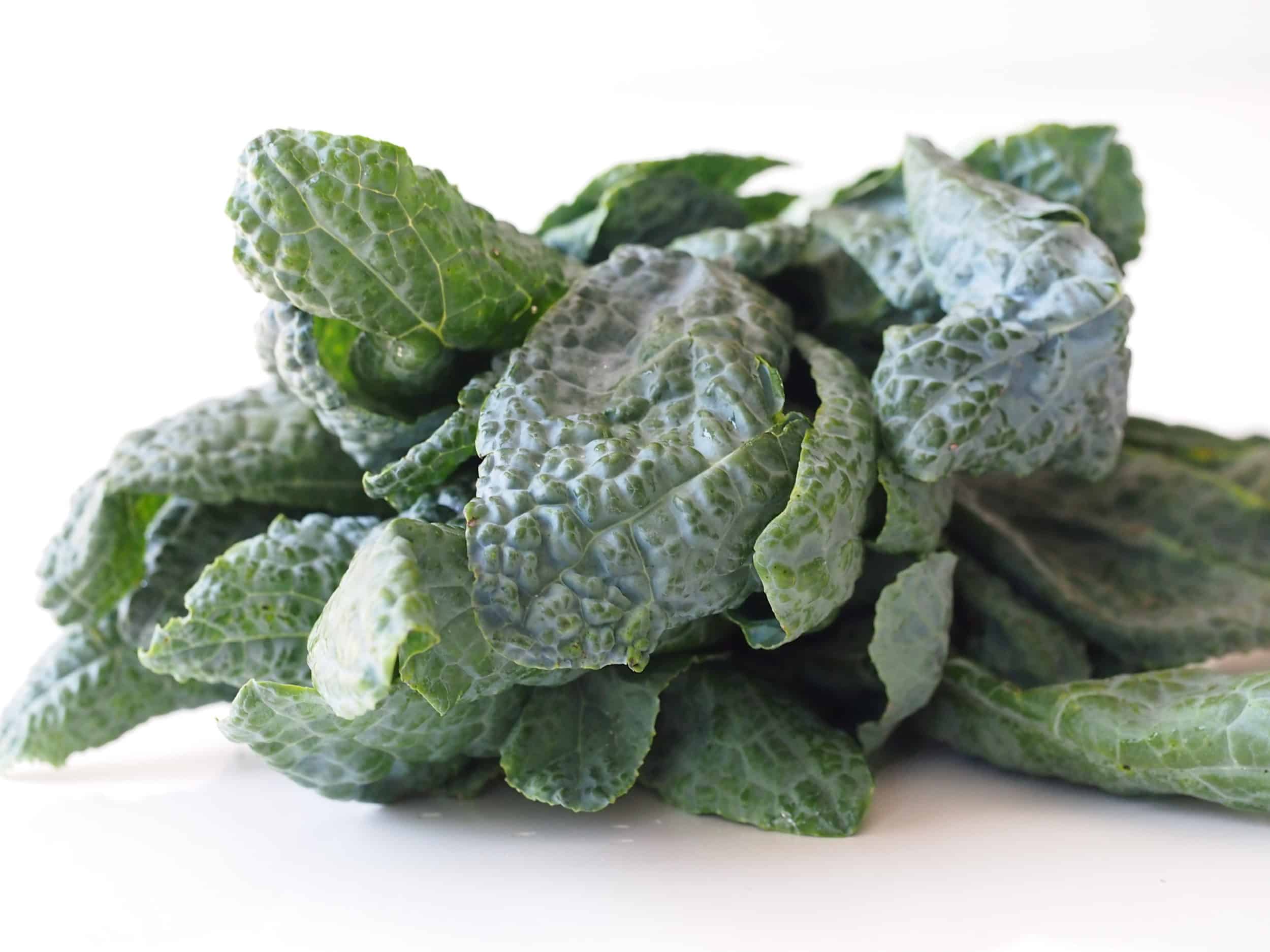 When can babies eat kale?

Kale may be introduced as soon as baby is ready to start solids, which is typically around 6 months of age.

Sebastián, 11 months, eats shredded raw kale and has mixed feelings about it

Max, 15 months, eats an omelet made with sautéed kale. Offering greens like spinach and kale more than one way (to empower your baby with choice) can increase the likelihood of consumption

Is kale healthy for babies?

Yes. Kale is a type of leaf cabbage, and it’s one of the most nutrient-dense foods on the market. The leafy green is packed with vitamins A, C, and K, as well as calcium, which helps your baby build strong bones. Fun fact: one cup of kale has more vitamin C than an orange!

While kale is a nutrition powerhouse, it has its downsides. In 2019, kale was added to an annual “Dirty Dozen” list (a list by the Environmental Working Group with the fruits and veggies that tend to have the most pesticides). Like spinach, kale also contains nitrates, which if consumed too regularly, can negatively affect oxygen levels in your baby’s blood. For this reason some doctors suggest waiting until your baby is 12 months old to introduce leafy greens (along with beets and other veggies high in nitrates). However, the American Academy of Pediatrics has not found any evidence that warrants a prohibition on introducing the leafy green to babies older than 6 months of age.

To reduce the risk of exposure to pesticides and nitrates, buy organic frozen kale or very fresh organic kale. If organic produce is not possible with your budget, go for conventional broccoli, cauliflower, or sweet peas, which tend to have the least amount of pesticide residue.

★Tip: If baby is rejecting leafy greens, try serving kale chips. Kids love the crunch! Most pre-made kale chips are too high in sodium for babies so make your own by chopping washed kale, coating it with olive oil, and then baking it in the oven until crispy. Kale chips are notorious for clinging to the back of the throat, so be sure to have some milk or water in a cup nearby.

Is kale a common choking hazard for babies?

Kale doesn’t pose a significant choking risk, though any food can be a choking hazard, so be sure to watch closely as your baby eats. Like all leafy greens, kale may cling to the back of your baby’s throat, which can cause discomfort and coughing. When this occurs, offer your baby some milk or water to aid swallowing.

Is kale a common allergen?

No. Allergies to kale are rare. In theory, however, any food can cause an allergic reaction, so always watch closely while your baby eats. 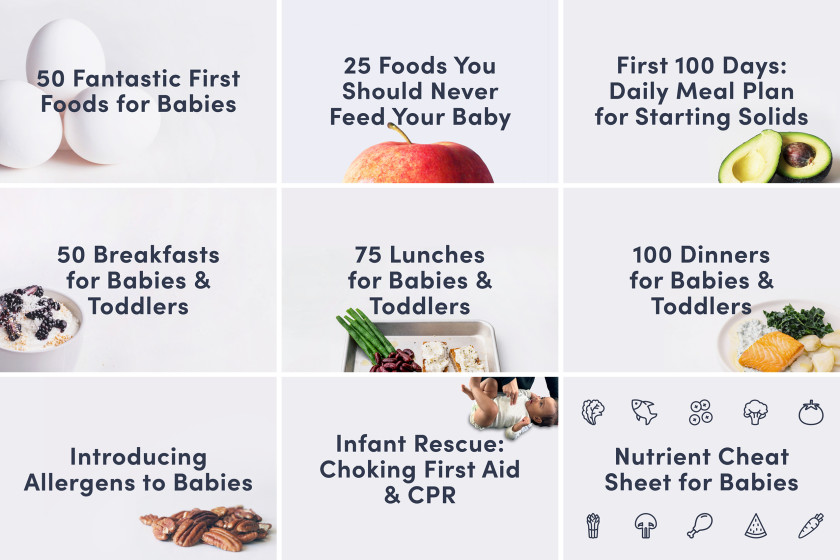 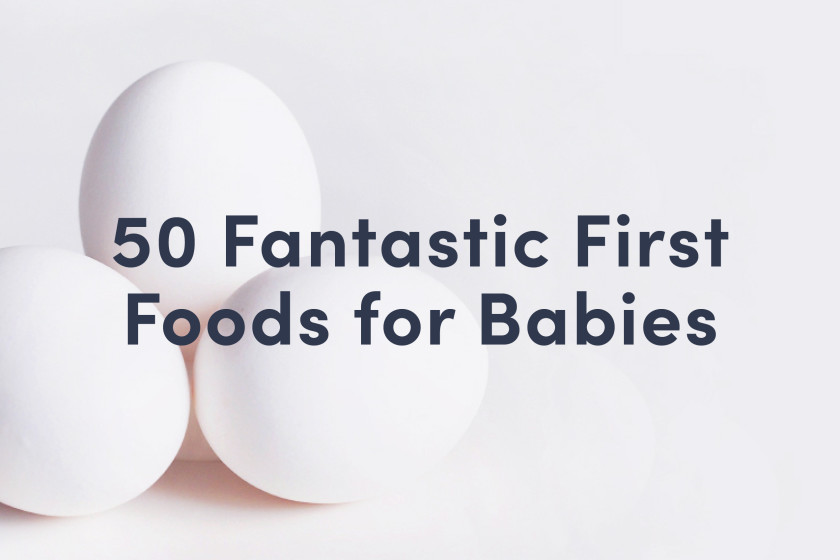 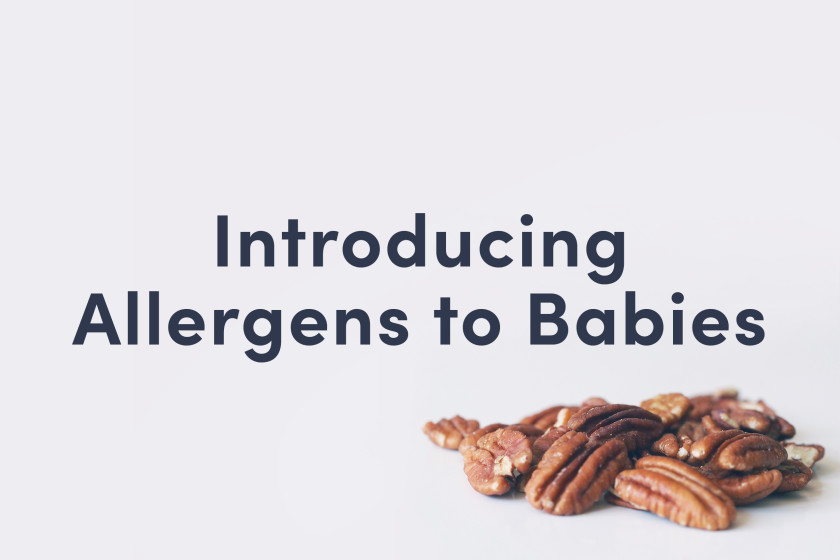 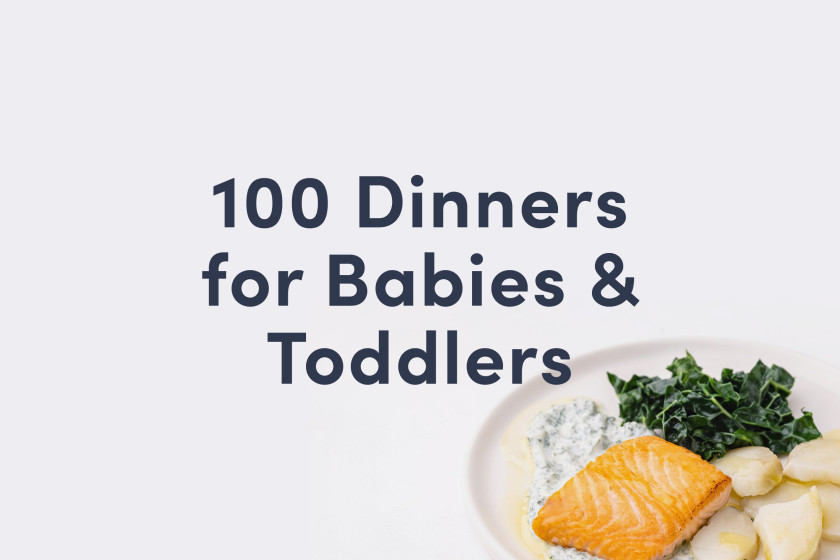 How do you prepare kale for babies with baby-led weaning? 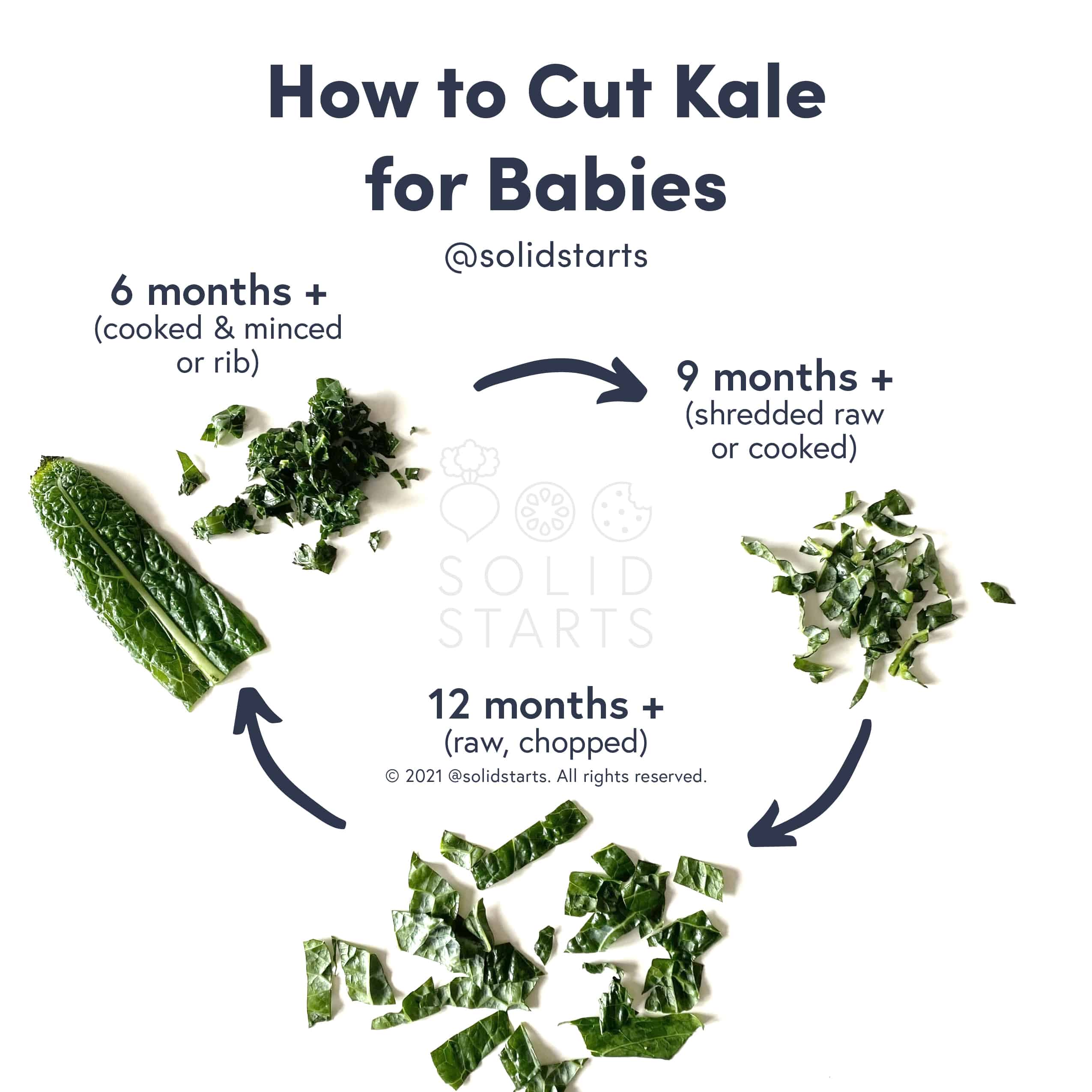 For babies who are just starting solids, try mincing sautéed kale and folding into an omelet or into a lentil or meat patty. While you can also serve the minced cooked kale on its own, leafy greens can cling to the back of the throat, so folding it into other foods will minimize coughing and gagging. If you'd like to expose baby to the whole kale leaf, go ahead and do so. Just keep the the leaves on the ribs for structure and resistance.

This is a great age to try serving kale on its own to acclimate baby to the taste of leafy greens. Try shredding cooked or raw kale and encourage baby to pick up the thin strands with their fingers as a finger food. You can also explore kale chips (prepare for massive mess and coughing) or continue to fold minced sautéed kale into other dishes as you like.

Salad time! By this time many toddlers will be ready to work with chopped, raw greens with dressing. If your toddler seems to struggle with chopped kale, simply shred the kale into thinner strands. Alternatively you can serve cooked kale almost any way you like. Have a drink nearby for any pieces that cling to the tongue, roof of the mouth or back of the throat.

For more information on how to cut food for babies, visit our page on Food Sizes & Shapes. 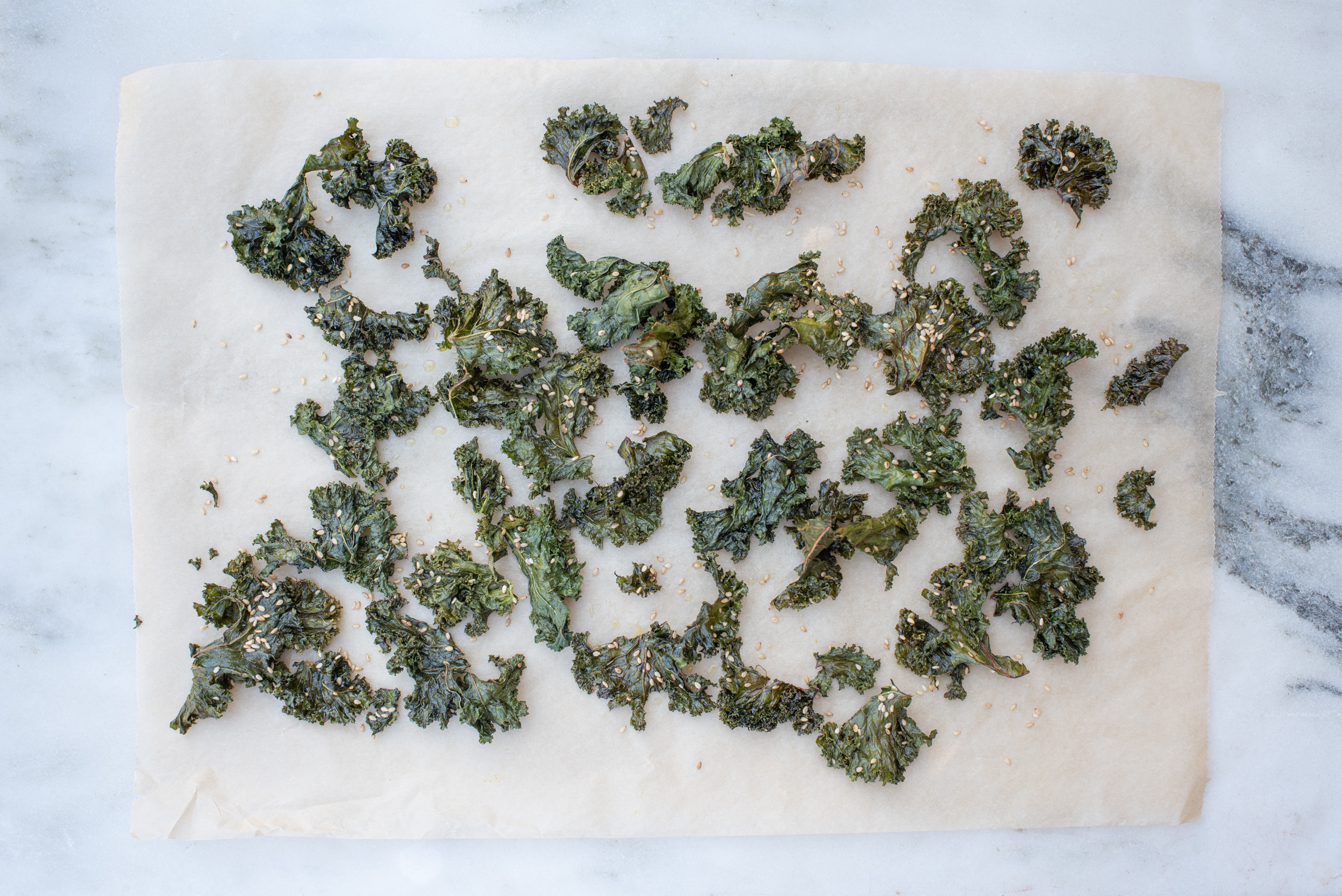 This recipe contains a common allergen: sesame (seeds). Only serve to a child after this allergen has been safely introduced.

To Store: Kale Chips keep in an airtight container at room temperature for 3 days. 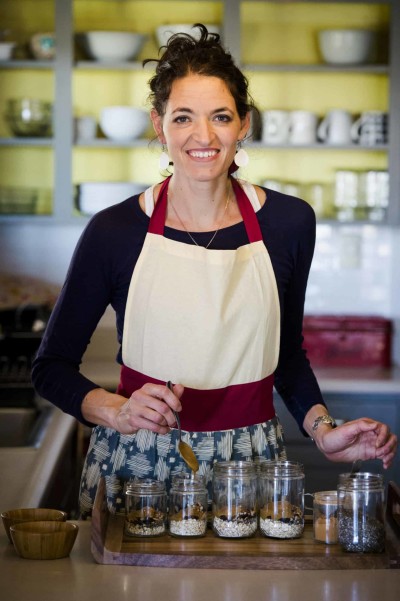